5 things to consider before the upgrading RAM

The Microsoft Teams client is the first Microsoft 365 app available for Linux desktops. This software provides support for chat, video meeting, calling and Office 365 documents on a single platform. In this post, we will learn about how to install Microsoft Teams on Linux.
Read more

XnConvert is a cross platform batch image processing software with which we can not only change the format of multiple images in one click but also perform watermarking, special effects, border, image adjustment etc. in a one click. Available for Windows, Mac and Linux.
Read more

Gone are the days when typing long documents either required the help of a typist or learning typing itself. Because now it is possible to type by speaking due to the development of artificial intelligence. In this post we will learn about various web based tools for Voice Typing.
Read more 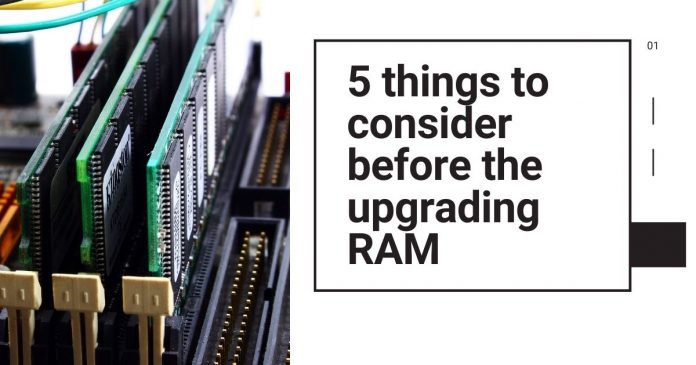 Do you really need to upgrade RAM?

In some scenerios, upgrading RAM is a good option. For daily use, such as web browsing, video streaming, running Microsoft Office and playing one or two games, we should have at least 8 GB of RAM.

Many mid and low budget PCs come with 4 GB RAM. However, they are not very fast and they get slow down as soon as one or more processes are started.

This is why we recommend at least 8 GB. If you have a 4GB laptop, check the manual to see if you can upgrade the RAM yourself. In some laptops, the RAM is soldered to the motherboard, in which case, a RAM upgrade is not possible.

READ  How to install Microsoft Teams in Linux

16 GB RAM is better for PC games players who want to play the latest games. Going above this really depends on what you want to do with your system. For example, a higher end PC that you want to use for 4K video editing will likely require something around 32 GB.

If these conditions do not cover your PC, below are some things to consider before upgrading to RAM.

If the low RAM is the cause of your problems, then you will be able to find it by checking the performance of your system. To do this, press Ctrl + Shift + Esc to open Windows 10’s “Task Manager”, and then click “More Details” to open “Advanced View”. Click on the “Performance” tab and then click on “Memory”. Then, start using your PC normally, keeping an eye on the Task Manager.

When you experience a slowness, check the “In Use” and “Available” sections that display RAM usage below the graph. If you often have more RAM available then it is not a problem of lack of RAM. However, if it shows maximum consumption each time during a running few programs then more RAM can improve things.

In the motherboard’s BIOS settings, you can activate a setting called an Extreme Memory Profile (XMP). If your PC has an AMD processor, you will see DOCP instead.

XMP is Intel’s technology that is, perhaps, an overclocking tool. However, if you only turn it on in the BIOS without any manual settings, it will let the RAM run at the speed for which it is rated, rather than slow.

Upgrading your PC’s RAM is not as easy as replacing a storage or graphics card. You need to choose the right type of RAM (modern motherboards support DDR4), and its speed must be compatible with your computer’s motherboard.

Additionally, if you keep one RAM module and add another, their speed should be the same. Nevertheless, some people prefer to use two identical RAM sticks instead of mixing and matching. To choose the right RAM, find out the speed of your computer’s RAM to see how much the upgraded RAM will actually be.

READ  How to Create Alias in Outlook?

When it comes to actual speed, if your PC’s RAM speed is low, such as 2,400 MHz, then upgrading to 3,000 MHz or more may improve performance slightly. If you are already using 3,000 MHz of RAM, then it will not make much difference.

Check your CPU and GPU

If RAM is not your problem and you have upgraded SSD then it might be time to upgrade the CPU or GPU. Or it’s time to buy a new computer.
As mentioned earlier, keep an eye on Windows’s Task Manager and see if CPU consumption is maximizing again and again. Try running some games. Open several programs at once. If the CPU is not the problem, then pay attention to the GPU. Maybe the problem is there.

RAM is a very strange part of a computer. If you do not have enough RAM, then increasing the RAM causes an unprecedented change in the speed of the computer. And at the same time, if you have enough RAM and you do not consume it completely, then increasing RAM will not make any difference. Therefore those who do not require RAM upgrade should consider upgrading SSD, CPU and GPU.

The Microsoft Teams client is the first Microsoft 365 app available for Linux desktops. This software provides support for chat, video meeting, calling and Office 365 documents on a single platform. In this post, we will learn about how to install Microsoft Teams on Linux.
Read more
Uncategorized

The Microsoft Teams client is the first Microsoft 365 app available for Linux desktops. This software provides support for chat, video meeting, calling and Office 365 documents on a single platform. In this post, we will learn about how to install Microsoft Teams on Linux.
Read more

In this post are going to discuss about how you can save the output of any Linux command in a file.
Read more

Webmin is web based system administration software for Unix and Linux. Using webmin you can control and manage your server through web browser. You can also call it the GUI of Linux server. In this post we will learn how to install webmin in Fedora 33.
Read more

Today we will discuss about TLDR. TLDR is a collection of "help pages" related to Linux commands maintained by communities that can be accessed by any client. This can become an alternative to traditional MAN pages. Because it is very easy to understand.
Read more
READ  Install LAMP Server in Ubuntu/Debian using Tasksel