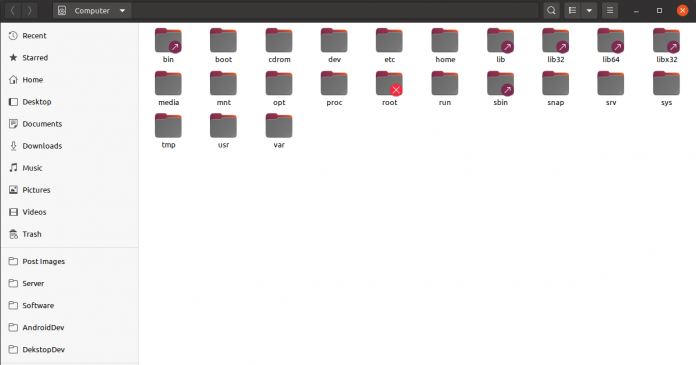 Users coming from Windows background to Linux are often get confused about the file system of Linux. Linux “/” directory is often compared to Windows’ C: drive. But this is not correct. There are no drive letters in Linux. Let’s understand the Linux Filesystem Hierarchy Standard and the purpose of various directories present in it.

Bin means binary. This directory contains all kinds of executable files that are required in single user mode system. Many important commands like ls, ping etc. reside in this directory. At the same time, application programs such as Firefox etc. reside in the /usr/bin folder.

Like /bin, /sbin also contains executable files. But it contains those binaries which are used by system administrators. Such as iptables, reboot, fdisk, ifconfig, swapon etc.

The /lib folder contains the essential libraries which are used by /bin and /sbin binaries. The libraries for /usr/bin folder binaries reside in /usr/lib directory.

In the /media folder, your files from removal storage devices such as folders and files of CDROM etc. are shown. For example, whenever you put a CD or DVD on your computer, a directory is created in the /media folder. And then you can access your CD / DVD files from there.

This is the directory in which the system administrators mount the file systems. However, you can mount partitions in any folder.

The /opt folder contains programs or packages that do not follow the standard file system hierarchy. For example, when installing a proprietary program, copy their files in the /opt/application folder.

Just as the /dev folder does not contain any actual files, instead hardware devices appear as files. Similarly there are no real files in /proc folder. /proc folder files represent system and process information.

The /run folder contains temporary files of applications such as process IDs and sockets etc.

If your Linux distribution uses SELinux (eg. Fedora and Red Hat) for security, the /selinux directory contains special files used by SELinux. This is similar to the /proc folder.

You can place files related to whatever services your system provides in the /srv folder. For example, if you use Apache server, you can place your website’s files in /srv folder.

Applications place their temporary files in the /tmp folder. Usually these files are cleared when the system restarts. But various applications keep deleting their files anytime.

The /usr folder contains files and binaries used by users. It mostly consists of multiuser utility and applications etc.

The /var directory contains files whose data changes continuously. Like log files, cache files etc. If you want to see php, mysql or any log files of your system, then you can find it on /var/log.