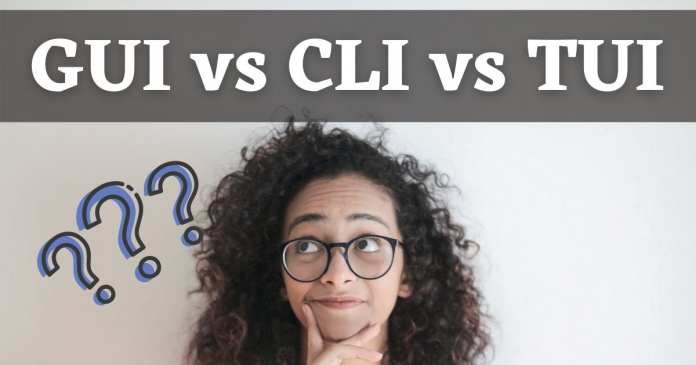 In the computer software world, you must have been hit by words like GUI, CLI and sometimes TUI. Let’s understand what are these things?

GUI means Graphical User interface. You must have heard this word most commonly. It is the GUI which has enabled common user to use computer. A GUI application is an application that can be run with a mouse, touchpad, or touchscreen. The mouse pointer is used to execute its various functions. Windows and Macintosh are GUI based operating systems. In Linux, desktop environments like Gnome, KDE etc. provide graphical interfaces.

The CLI is a command line program that accepts text input to perform a certain task. Basically, any application that you can use via commands in the terminal falls into this category.

TUI ie Terminal User Interface falls between GUI and CLI. It can also be called a kind of text based GUI. Before the arrival of the GUI, everything used to run on the command line, then in that time the terminal user interface provided a kind of GUI on the command line. TUI programs can be run via a mouse or keyboard. The best examples of TUIs are terminal-running games, Open Suse Yast, Aptitude.