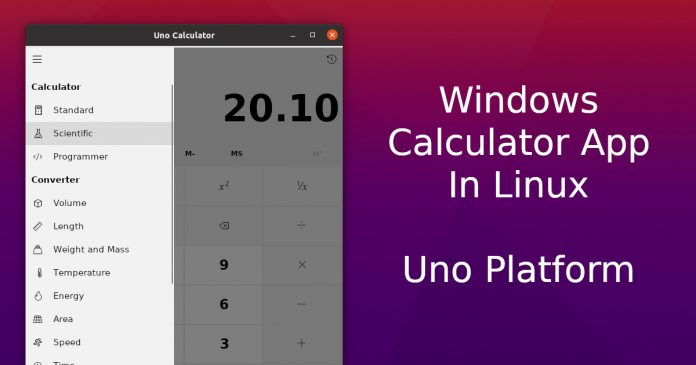 Want to use the Windows Calculator app on your Linux desktop? Yes! now you can.

It is built on the Uno platform. They took the source code for Windows’s default calculator app (which Microsoft made open source last year) and got it up and running on the Linux desktop.

And that’s why this app is called Uno Calculator because they can’t use the Windows brand name. It is available to install from the Snap Store, which means that it is available to a large number of users of Linux distributions.

Uno Platform is an effort to make “Write once, Run anywhere” applications that run on all platforms. It allows developers to build mobile and desktop apps using C# and XAML and seamlessly run and optimize them on all operating systems / devices that developers want to target.

On the Linux Uno Platform app The Skia rendering engine is used to create the UI and integrate into the Ubuntu desktop with a regular GTK frame. And it is built on all open-source, mono projects.

But is the Windows calculator app really useful? I think this should only be seen as a concept of what possibilities Uno can develop for developing software on Linux.

Ubuntu says they plan to work with the Uno platform to bring more off-world apps to Linux systems.

Enter the following command at the terminal to install Uno Calculator: