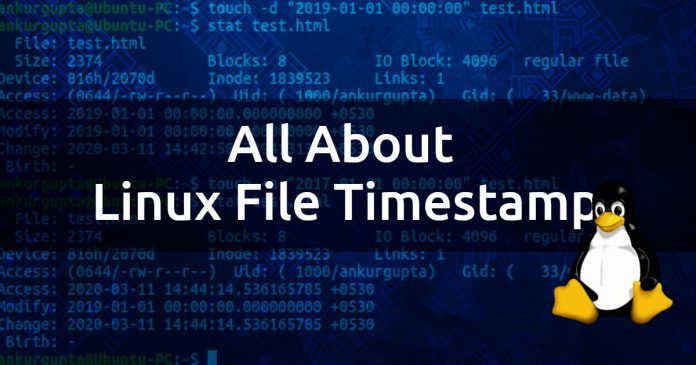 Access Timestamp indicates when the last time a file was read/accessed. If a software reads a file Access timestamp gets changed even if nothing has been removed or added to the file.

A changed timestamp indicates when a file’s metadata has been modified. For example, a change in File Permission will update its Changed Timestamp.

Viewing a timestamp of a file

Viewing all timestamps of a file at once

The stat [filename] command has to be given to see all the timestamps of a file simultaneously.

Changing the timestamp of a file

If you want to change the “Changed” Timestamp, you can change it by modifying file permissions of file. For example chmod +x [filename] will change your “Changed timestamp”.

If you want to keep the desired timestamp of a file, then enter the command touch -d “2020-01-15 10:30:45” [filename]. Here, you can enter any date. This command changes the access and modified timestamps.

Timestamps tell us the date and time when files are last accessed or modified. This enables the backup software to decide what files are needed to backup and what files are can be left. Backup software backup files whose timestamp has been changed. Therefore, you can also force an application to do any work with that file by changing the timestamp of a file.

See more: How to install Google Chrome in Debian Linux 10