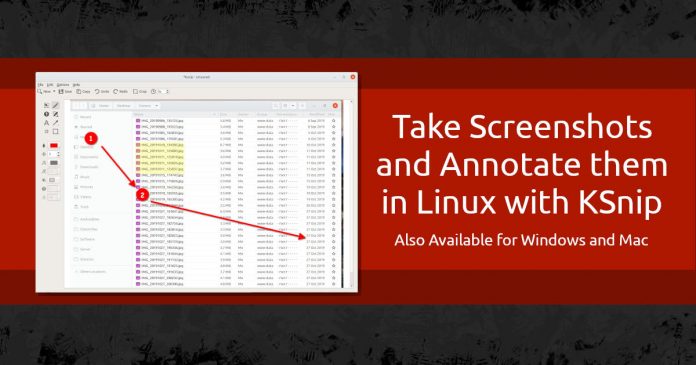 Although popular distributions of Linux usually have pre-installed software for taking screenshots, but if you want some advanced features such as annotation then you can try KSnip.

Ksnip is a free and open-source cross-platform tool with the help of it we can not only take screenshots but also add comments to it. It can take a screenshot of the active window with the selected rectangular area, full screen, and also take screenshots in a short time delay.

The good thing for Linux users is that it is also available in the AppImage format. Because AppImage files do not require installation. We can run them directly by either double-clicking on it or via the command line.

Binaries can be download from here . RPM, DEB and AppImage are currently available for Linux, DMG package for Mac OS and EXE file for Windows.

To use AppImages, just make that file executable. After that simply double click or execute from the command line.

Simply install the rpm file with the rpm command and then use it.
$ rpm -Uvh ksnip * .rpm
$ ksnip

Install and use the deb file via dpkg.
$ sudo dpkg -i ksnip * .deb
$ ksnip

The exe file comes in a zipped package with all the necessary dependencies that just need to be unzipped with your favorite zip tool. Ksnip can then can be started by simply double-clicking ksnip.exe.